Diving into our Soil

If there’s a common denominator between Carmel’s land developers and land conservationists, it is this fact: Land is our most valuable resource.

Putting the Pieces Together

“Working with the land is like a puzzle to find the right balance of conservation and development for the benefit of the environment and ourselves,” says Brittany McAdams, Carmel Clay Parks & Recreation’s (CCPR) first natural resources coordinator. “When you understand the soil, you can help make the best land management decisions possible.”

In her role, McAdams is charged with connecting the parks and how they function with the local community through nature programs, open dialogue and citizen science. Joining CCPR last spring, McAdams has spent her first year like any dedicated scientist, researching where we’ve been, where we are, and what the future holds.

In 1837 when Carmel’s first settlers arrived at the city previously known as Bethlehem, they found young fertile soils formed from glacial till. These soils supported rich beech maple and oak hickory forests, prairies, and created wetlands that dotted the landscape. Settlers discovered the soil was perfect for farming, and over the years, depleted these fertile soils through intensive agriculture and row cropping systems, including timber harvest.

Despite substantial growth and development over the years, Carmel residents still have several pristine forest areas with very old trees. These mature forests can be found within Flowing Well Park and West Park. Some of the oldest trees—sycamores and cottonwoods—grow along the quiet stream banks.

Carmel may now be much more than a bustling farm community. Its soil and natural resources matter as much today as they did more than a century ago. “Whether you are deciding where to plant a tree, build a structure or obtain the best crop yield, soil science is at the foundation of all of those decisions,” says McAdams. “Yes, parks are pretty, but my hope is to help our community recognize their intrinsic value, and that everyone has a stake in it.” 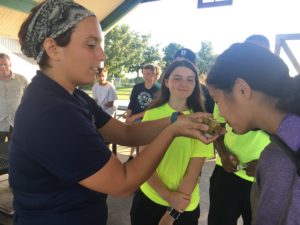 A native of Aurora, Indiana, McAdams received her undergraduate degree in environmental science and land use from Purdue University and her master’s degree from the University of Alberta in Edmonton, Alberta, Canada in soil science. Her position with CCPR is the perfect marriage of her passions—land management practices and community involvement.

McAdam’s enthusiasm—and smile—shine brightly in unique, hands-on educational programming rooted in citizen science. CCPR’s first BioBlitz was a big success. In September 2018, 73 participants, including park staff, local experts, students from University High School, and community volunteers met in West Park to become scientists for the day by helping with data collection and species identification. A multitude of important data was gathered, and community members were introduced to local organizations, such as the Hoosier Herpetological Society, where they can further get involved to enjoy the nature around them.

So what does being a citizen scientist mean?

Citizen scientists make contributions for the greater scientific good. Exciting opportunities are on the horizon for 2019, including a series of classes that will help residents utilize free apps to gather data and give back to the natural resources that form the foundation of our park system.

Seasonal BioBlitz events, Monarch tagging and the popular ‘My Park’ series are in the mix to highlight the historical, ecological and scientific features of our natural areas.

“Fun and exciting opportunities abound for all to apply what they have learned and give back,” said McAdams. “I hope to see you in our parks.