Where in the world has Dena Osting been? Well, to tell you the truth — a little bit of here, there and everywhere. Her passport is filled with colorful stamps documenting her global teaching and leisure travels. In recent years she’s been working and sharing her vast educational experience and knowledge in the United Arab Emirates, specifically in Abu Dhabi, a far cry from her days growing up in Indianapolis and her more recent move back to Carmel. Osting says her work with the Carmel Clay Parks & Recreation Extended School Enrichment program and the kids she sees every day is just as rewarding as her interaction with kids on the other side of the globe. Learning, caring, collaborating, and including all is a universal language for her. 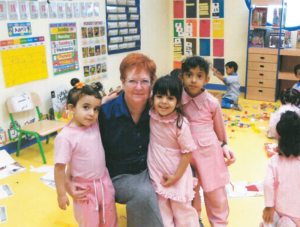 “I grew up in the Indianapolis area but moved to Wisconsin soon after marrying my husband, an industrial chemist, and quickly became the mother of two small children,” shares Osting. “My husband died of cancer at the very early age of 39, and I quickly became a single mother on a single income. When finances began to get difficult, I knew it was time for me to return to school for more education.”

Osting earned degrees in education and special education and spent over 10 years working in Wisconsin developing programs for young children from birth to 8 years of age. In 2012, Osting was ready for a new challenge and began searching for a global teaching opportunity. She traveled to Chicago and was interviewed for a teaching position in Abu Dhabi. While many might fear such a drastic change in teaching and cultural environments, Osting embraced the adventure and the opportunity to help children, no matter where they are located or what disabilities they have, to develop the best plan for their educational progression and inclusion. 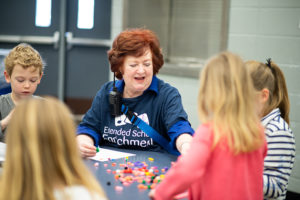 “I lived in a nice apartment in the city and was driven about an hour-and-a-half out into the desert each day to work,” Osting says. “I soon realized that the children with disabilities had not been integrated into the school’s daily routines. I worked mostly with kindergartners — some of them blind, without all their limbs or on the autism spectrum — figuring out a plan to get the students up to speed and what would be required to do so. It really wasn’t any different than it was working in the United States. While some of my teaching colleagues were not so enthusiastic, I wanted to be a part of the culture. I dressed, ate and was respectful of their everyday life. I was totally immersed in the culture.”

Osting’s time in the Emirates allowed for her to travel extensively when she had a break from teaching and she took full advantage of that perk traveling to China, India, Egypt, Ireland and Sri Lanka. The teacher became the student as Osting visited several different countries and experienced each of their unique cultures and physical beauty. While abroad she learned as much as she could about each of her travel destinations.

In 2018, after working for over six years abroad, Osting returned to Carmel to take care of her mother who was ill. She was grateful to have had time with her mother before her passing, and the move back allowed her more time with her own family as well. However, Osting soon found herself wondering what the next “destination” should be for her lifelong teaching adventure. She didn’t have to travel far to find it.

“I’ve been working Monday through Fridays at the after-school portion of the ESE program and I’ve fallen in love with the kids and everyone I work with. Our work team ranges in age from high-schoolers to folks older than I am but we seem to blend together to bring a sense of acceptance, care and inclusion to all the kids.” Osting says.

Our work team ranges in age from high-schoolers to folks older than I am but we seem to blend together to bring a sense of acceptance, care and inclusion to all the kids.”

The life travels of Dena Osting have brought her right back to where she started. Through the years, she’s gathered some amazing stories and experiences. Now, she’s able to share those travels with some very lucky kids each afternoon. “You don’t always know why you are going down a specific path, all you can do is soak up the adventure along the way.”

Sheryl focuses on branding and marketing engagement. She’s a storyteller, editorial and media consultant, and brand builder. This story was written in partnership with Pickett & Associates.