Weather Hotline:
317-843-3870
Our ESE Program strives to include all in before and after school care. Learn about Extended School Enrichment

Empowering Students to Use their Voice Leads to Happiness, Fun and Learning

ESE is founded on the belief that each and every student is capable of success. Staff is committed to setting high expectations and assuring the development of a strong foundation in basic life skills.

The ESE program has all of the features you would expect from a before- and after-school program including breakfast, snacks, recess, and academic assistance. What makes ESE stand out from other providers are the enrichment clubs that give students a chance to explore their interests. 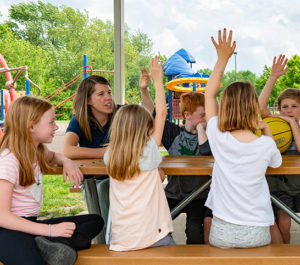 Since its launch in 2006, ESE has had a strong focus on empowering students and giving them a voice in the program’s activities based on the program’s core belief. This was developed into a formal process three years ago with the implementation of Student Voice + Choice.

At the core of Student Voice + Choice is the ability for students to have a say in enrichment clubs. Students choose from categories like sports, hobbies, arts/crafts, science, and others, put in their ideas, vote, and then enjoy the clubs of their own design.

Extended School Enrichment & Summer Camp Series director Jennifer Brown says, “While we’ve always had a focus on innovative and engaging programming, a big game-changer for all of us was the addition of Student Voice + Choice. It’s empowered our students and given them a heightened ownership of our program.”

Enrichment clubs are voted on every quarter. Two clubs are featured before school and three clubs are featured after school, for a total of 25 clubs a week at each school. To keep parents in the loop on all the club fun, staff and students produce videos throughout the school year that are sent via email updates to parents.

“We take any student suggestion seriously,” says Elijah Bullard, ESE site supervisor. “We are lucky as we employ an eclectic staff. For example, one of our staff is a trained nail technician and another is certified in American Sign Language, so their insight and expertise brought the club idea to the next level.”

In addition to staff’s commitment to empowering students, they are committed to inclusion. A sense of belonging is the starting point for all children, and focusing on inclusion is in line with CCPR’s mission to include all ages, levels and abilities.

Eric Covington’s daughter is enrolled in ESE, which he says is nothing like the before-and after-school care of his youth — It’s much better. “My daughter wants to stay longer on certain days because of the featured clubs. ESE is a big plus for her,” says Covington. “I feel super lucky to have ESE and the staff. It gives me peace of mind that the transition before and after the school day is seamless.”

Covington’s daughter has selective mutism, an anxiety disorder characterized by a child’s inability to communicate effectively in select social settings, such as school. He says the ESE staff are amazing. “Carmel Clay Parks & Recreation is proactive about inclusion in every way,” says Covington. “The kids get the same level of care and security just like the school day, and it is because of the staff and the consistency that we are comfortable here.”

The ESE program is a safe and supportive environment for everyone, no matter their ability. “With Student Voice + Choice, we often see students who hesitate to get involved see that they have a voice, buy-in and get involved. It’s thrilling!” says Brown. The addition of Student Voice + Choice is a demonstration of the value ESE places on each student’s voice, ability and success.

Inclusive and adaptive programming centers on nurturing authentic relationships and providing a barrier-free environment for students of all ages, levels and abilities to feel empowered and capable of success. 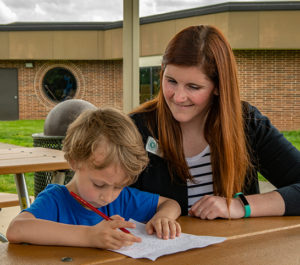 All 11 ESE sites are inclusive. Inclusion supervisor Aimee Rich works directly with parents/guardians, students and staff to assess needs, develop a plan and provide accommodations as needed, so all students are able to participate and build relationships.

Modifications come in many different forms. It’s all about what a student requires to feel more involved, confident and empowered.

“We want all children to be able to explore and be a kid, regardless of ability,” says Rich. “It brings me such joy when a student feels confident and makes ESE their own.”

In 2016, CCPR won the National Recreation and Park Association Excellence in Inclusion Award, recognizing its efforts in implementing inclusive processes and practices and providing supports for inclusive participation.

For more information on modifications and supports, including 1:3 ratio, or to request an assessment, contact Aimee Rich at 317.843.3866 or arich@carmelclayparks.com.