Tiffany Buckingham has worked with Extended School Enrichment and Summer Camps since day one. A look at how she got here and where she’s headed…

The kiddos playing basketball, swinging from the monkey bars and playing tag on the playground at Carmel Elementary lit up when they saw Tiffany Buckingham – or Mrs. Buckingham, as they call her. She gave them one of her infectious smiles and they returned toothy grins as they ran up to meet her. Buckingham is great with kids, it comes naturally to her. So, this sort of interaction is far from rare and is what makes her outstanding at her job. 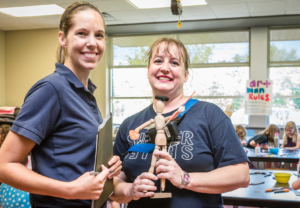 Buckingham is the assistant director for Carmel Clay Parks & Recreation’s Extended School Enrichment (ESE) and Summer Camp Series (SCS). ESE is a before- and after-school program hosted at Carmel’s 11 elementary schools. The SCS consists of 14 summer camps offered for kiddos ages 5 to 14. She shares that she didn’t always know what she wanted to do. In fact, she never gave much thought to what her “dream job” would be. She grew up on a small hobby farm in southern Indiana helping take care of animals with brothers and sister. At that age, her passion was being with family and friends.

Finding Her Passion for Recreation

When it came time to head off to college, she attended Indiana University in Bloomington. She began pursuing a degree in business, but it didn’t seem like the right fit. When she found out she could major in parks and recreation – which she thought was basically majoring in fun – she was thrilled.

She joined Carmel Clay Parks & Recreation (CCPR) team in the summer of 2006 and the Extended School Enrichment program launched that fall. Looking back on it now? Buckingham said it was perfect timing. 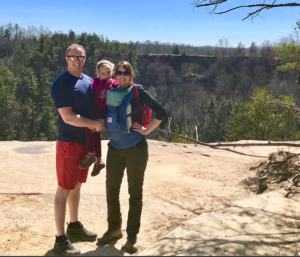 As part of the pilot program for ESE, Buckingham started out as a site supervisor. In that role, she had the opportunity to develop the programming for her sites and help form what the program as a whole would become. ESE now serves 2,500 students and SCS has nearly 7,000 participants – the growth has continued each and every year. “I’ve grown so much personally and professionally over the last 13 years. I’m now a parent of two little ones and I’m able to see things from a different perspective and connect with the families in our program,” shares Buckingham.

After 13 years as a site supervisor, she was named assistant director for ESE and SCS in spring 2019. Buckingham describes herself as easy going and creative, traits that make her outstanding in her new role. She shared her main focus moving forward is on collaboration and the success of her students, staff and programs. Looking back, she said her favorite thing about her job has been seeing ESE and SCS participants grow up over the years. Some of whom have come back to work for the program – a true testament to its success and impact.

“My biggest accomplishment has absolutely been continuing to learn and grow at Carmel Clay Parks & Recreation,” shares Buckingham. “Not only have I grown, but I’ve also seen our program continue to grow, evolve and improve from year to year. It’s amazing and I love being a part of it.”

Interested in joining the CCPR team? Explore all employment opportunities!

Come explore, engage and connect with us!